In the majority of the system, it is necessary to catch the bus by standing at a red, white and blue HARTransit bus stop sign. Be ready at least 5 minutes before the bus is due to arrive.
Flag stops are allowed under normal conditions in the following portions of the system only:
To board in an area where flag stops are in effect, stand near the curb and wave to the bus. Do not wait on a curve, next to a right-turn lane, or on the opposite side of the street from the bus.
Drivers are not authorized to stop for passengers flagging down the bus where bus stop signs are installed, unless the system is on snow routes.

There are 545 designated bus stops in our service area. Find a stop below to help you reach your destination.

HARTransit welcomes bicycle riders to travel on the bus with their bikes. Every Citybus vehicle is equipped with two bike racks. Standard bicycles are not permitted inside HARTransit Vehicles. Folding bicycles, as long as the passenger maintains control over them, are permitted inside vehicles.

Grocery bags and parcels are permitted on HARTransit vehicles, but passengers must maintain control over these items and carry them on the bus themselves in one trip. HARTransit will make reasonable accommodations to passengers with disabilities that need more assistance.
Items with wheels, such as carts or strollers, must be collapsed during travel.
The following are not permitted:

HARTransit reserves the right to deny bus service to anyone who habitually abuses the service; whose conduct on board vehicles interferes with the safe operation of the vehicle; who disrupts vehicle scheduling; who behaves in a way that is offensive to employees or other passengers, interferes with and/or disturbs the operations of the vehicle, or otherwise violates HARTransit policies.
Specific passenger activities prohibited while on HARTransit vehicles include:

Announcements with detailed descriptions are posted a week ahead of the holiday.

Shuttle riders should take note that on Christmas Eve, New Years Eve and single days bridging holidays with weekends Metro-North will run an altered schedule that may affect the operation of connecting HARTransit services. 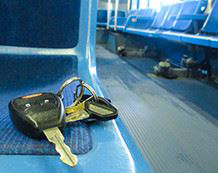 Items found on buses are secured in the Administrative Office at the HARTransit Operations facility. Riders who lose items on the bus should call 203-744-4070 x120. Those that may have lost items on the bus are encouraged to call the office as soon as possible and to pick up items promptly.
Items are available for pick up at the Administrative Office during normal office hours. Other arrangements may be made for pickup after hours.
Non-perishable items will be retained for a period of 60 days; however, more valuable items will be retained for a longer period. Perishable items will be discarded immediately.

Please use the following prompts: